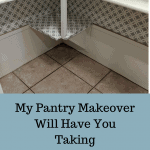 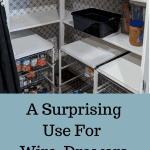 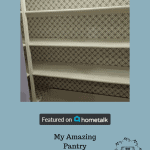 My Pantry Makeover That Tripled My Storage

I live out in the sticks as people like to say. We have a mini-farm type of property in the desert. To have critters come in is not too unusual. We just drive them out and we are usually good for another 2 or 3 years until the generation that was old enough to remember what horrible things happened to your people in the house was gone, and then the silly youngsters would come back,  I am only kind of joking, I don’t really know why it seems to happen in cycles. But, his time it leads to a complete pantry makeover.

It was mice. I saw one in the bathroom, then we found one drown in the goats’ water. A few days later our dog had one. But then. The little varmints showed up in my pantry. That is crossing the line.  And the Pantry became a battlefield. After a few days and a body count of only 5 from the pantry traps, it was time to start the cleanup. In fairness to the mice, we have lived here 17 years and this is the first time they have crossed this line.

Since I was going to have to take everything out any way to wash down the shelves and all the cans and stuff, I decided it was time for a pantry makeover that I had been thinking about.  By removing a shelf I could put some Ikea Drawer units in that would hold most or all of my canned goods. I had 3 that I was not using anyway. Yes, I was pretty proud of my brilliance. Thank you mice for making me do this.

So step one was to remove everything from the pantry. Yes, everything.  I am so embarrassed to be sharing this. I had already taken some stuff out when I remembered to take a picture. So here is the before picture. This is what your kitchen might look like for a while. I had to order some containers for some of the food so it didn’t all get cleaned in one day. Bonus! you can’t cook in this mess so dinner is eating out. Get it all out, even the shelf!

When I said I took everything out I meant even the shelf paper. Then I cut out the bottom shelf. I had to leave the corner part in for the structural integrity of the rest of the shelves. I used a reciprocating saw to cut the shelf out,  I probably should have used a circular saw, it would have been a better cut.  Yes, I did jump the gun a little, there was still some stuff in the pantry when I cut out the shelf. A little side story, I had not told my husband I was doing this, so I had to get the shelf out before he could object. I didn’t really have time to take everything out before I got this part done. Wash it Up and Make it Pretty

Next was to thoroughly wash everything in the pantry, I used an Oxyclean product and washed everything, the shelves, and walls, and even the floor. I decided that I didn’t want to put shelving paper on this time, but I did want to fancy up the walls some.  So, I made a run to our local Walmart store and grabbed a few rolls of contact paper,  and put that up between the shelves. Looking better already. I did have to use it on the bottom shelf to hide the bad cut lines. Now the Magic Part of My Pantry Makeover

Next was to put the drawers in, look how much you can get in just one drawer! I could fit 3 drawer units into the pantry so I have 12 drawers of space where I used to have just one shelf. There is some bonus space too if you put tops on the drawers, between the units and the now first shelf.  In my pantry, there are about 8 inches, so there is room to store 12 or 24 packs of soda there.  Unfortunately, Ikea no longer makes these units, but here is a link to one from Home depot that would also work. Umm part of the extra space came from throwing out all the expired canned goods. I mean like who knew I had canned veggies that expired 3 years ago?  And yes, I Lysol wiped every single item that went back into the pantry.  It’s never been this clean. I put in all 3 units and started filling them up with canned goods and things that the mice couldn’t get their grubby little teeth on if they came back. The only problem I could see is that you need to be a little careful of how much weight you put in each drawer or they don’t pull out smoothly. I also started putting some things that were too tall for the drawers back on the shelves. I had ordered some plastic containers to put some of the food in that was sold boxed. I know this sounds a little crazy, but would you expect less from me? The very same containers that you can get, or at least by the same manufacturer, are much cheaper in the pet section.  I bought a bunch of these 10-pound plastic containers.  Don’t they look like they were made for my pantry? They are food safe and have a “Fresh Tight” seal. I like them so much that I have ordered more.  Then I used a bunch of Ball Jars and other jars to put grains in. They worked great and no mousy is going to chew through them. Then I ordered some of these,  they hold nine 1 pound boxes of pasta. I only ordered 3, but I used 2 for parrot food, so I had to order more of these as well.   The moral of the story, get twice as many as you think you will use. Over in the baking section  I also used a lot of jars. I actually have some behind the taller jars, but since I don’t bake much I was comfortable doubling up in this space. Some of the canned goods below the baking stuff may go into drawers. since I  had 4 empty. I am just waiting for the rest of the plastic containers to come in. When they get here I may have to shuffle some stuff around.  I still have some boxes on my counter that I need to put away. So that’s how I did a pantry makeover and actually tripled the storage space. I love this configuration of my pantry, and how neat and tidy everything looks.  Should I be thanking the mice for making me get this done? Now I am feeling so accomplished that I may even clean out my hall closet. 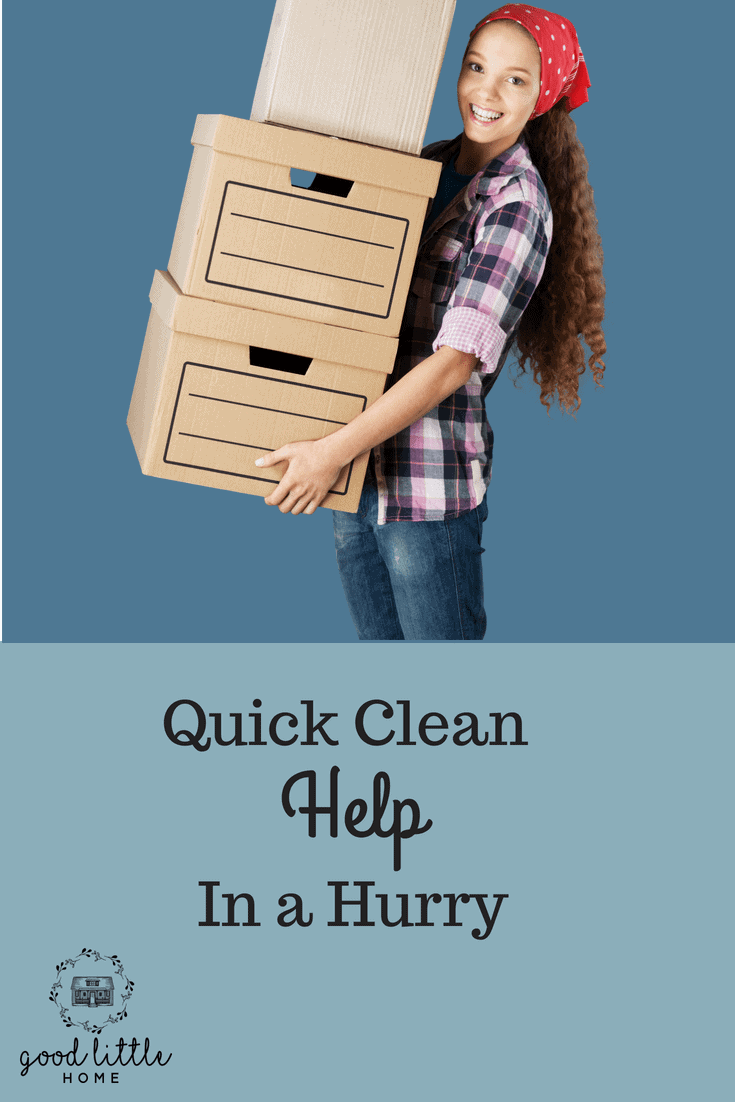 The Quick Clean Plan You are having a perfect morning. Relaxing and still in pj’s sipping coffee,  and catching up on some reading. Life just doesn’t get any better, and then the phone rings. It’s your Mother in law, so you have to answer. She greets you with the joyous news that she will be… 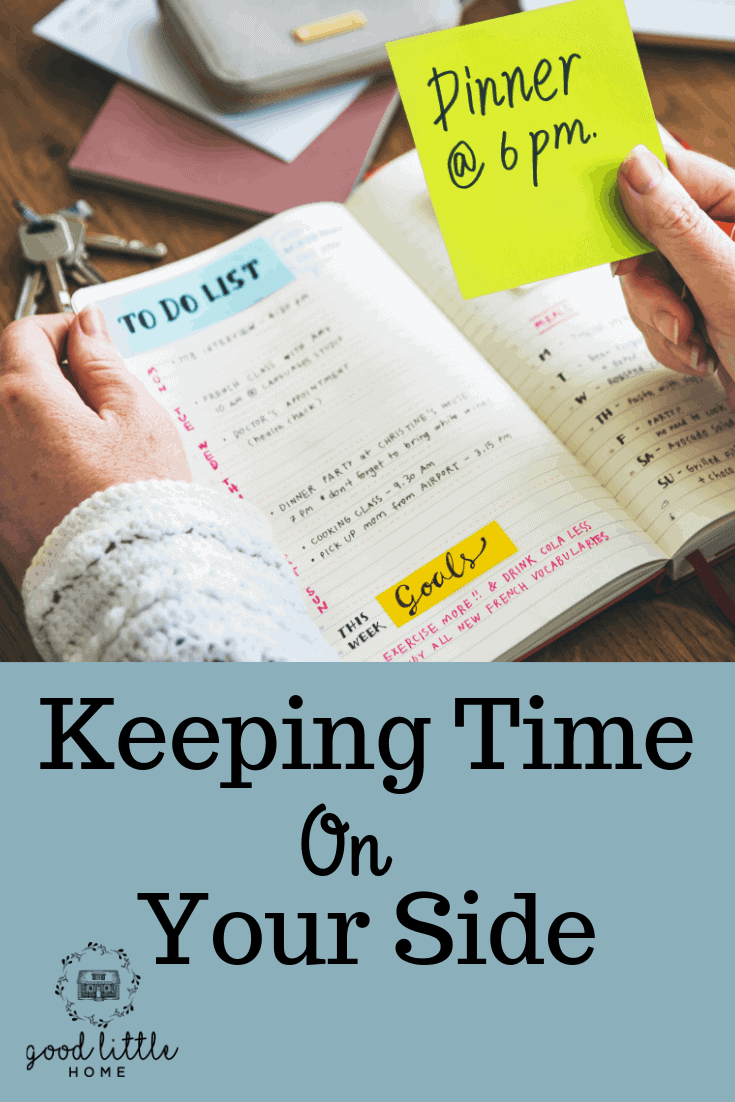 Hello Friends.  Let’s talk about planners. It seems like every blogger is selling one these days. I have been just buying whatever is on sale, or cheap on Amazon. This year I decided that I wanted a nice, pretty, girly sort of planner. 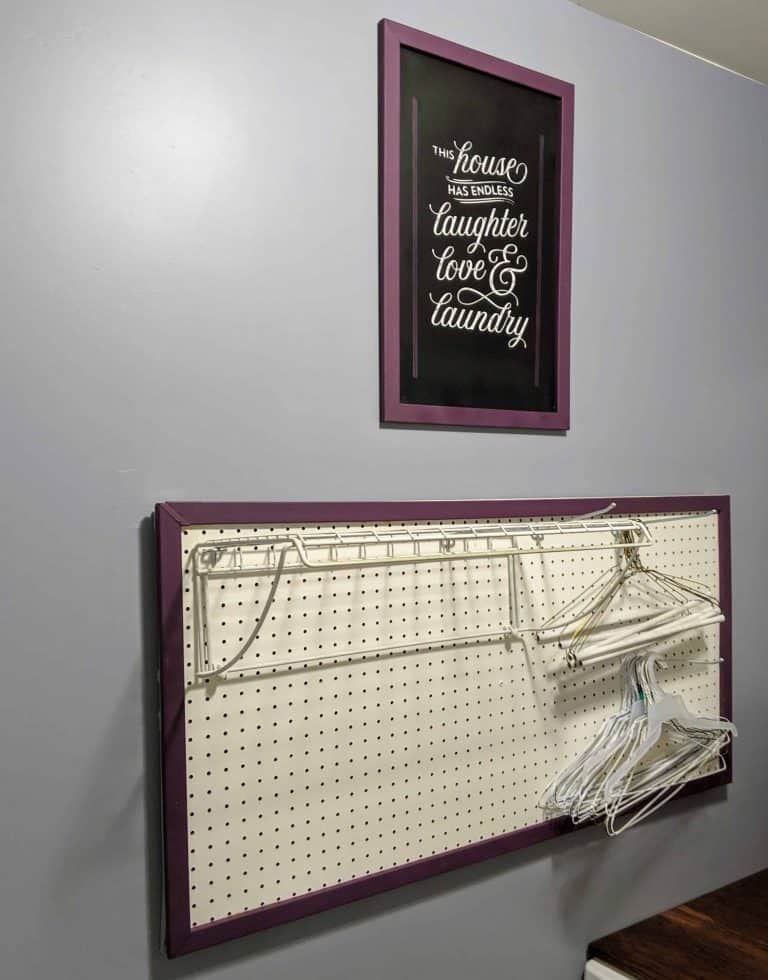 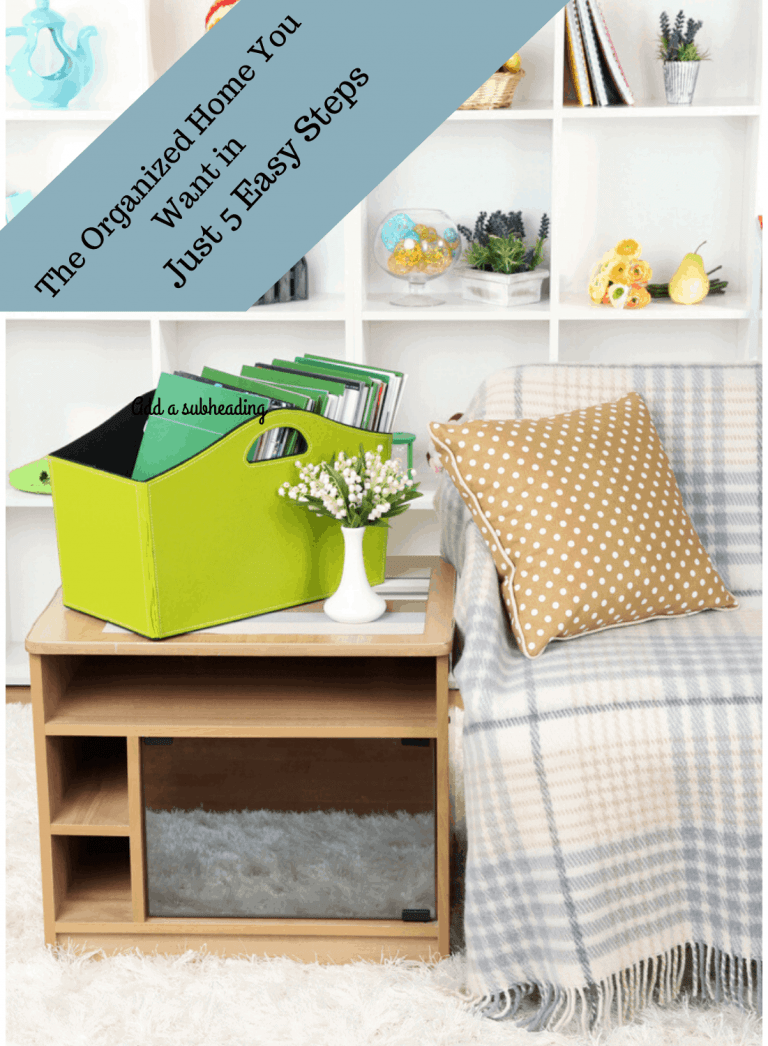 The Organized Home   Do you ever feel like the mess around you in your home is a reflection of your life? I know I do. When I am up and energetic and happy I keep my home much neater than in the times when I am not. We want order and beauty in our… 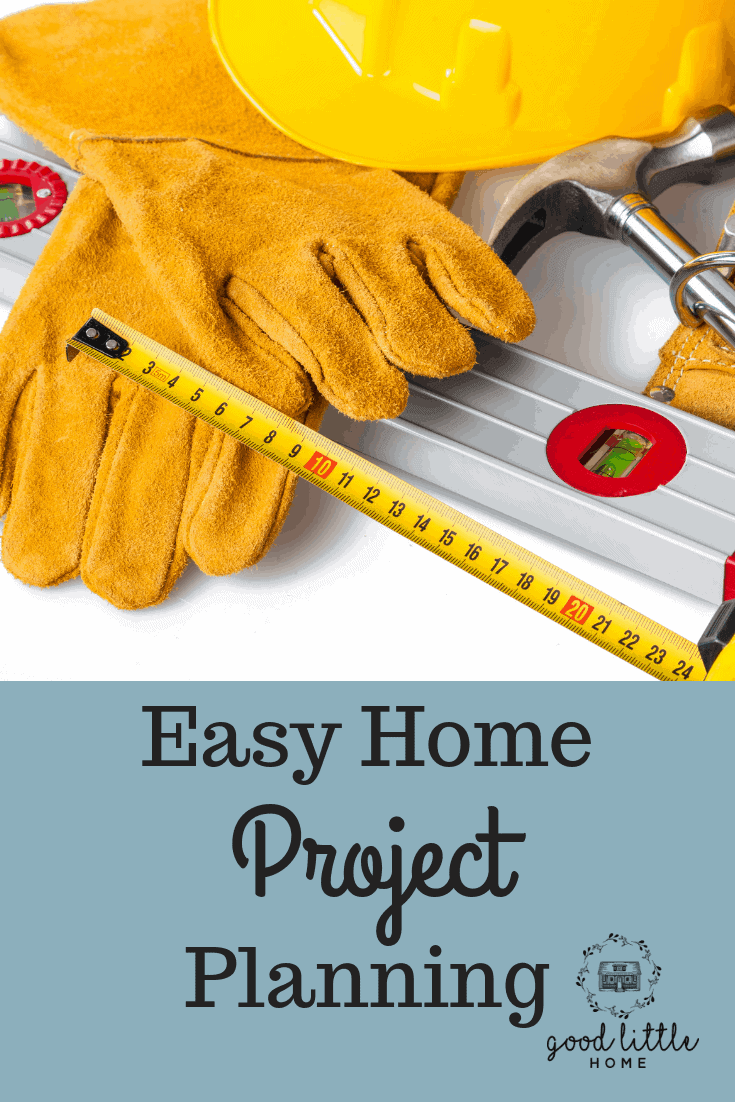 Today we are going to learn that home project planning can be simple, useful and most of all fun. As we go through the process of planning we get to see our project come to life in our imagination as we map out a way to make it happen in real life.  Never start… 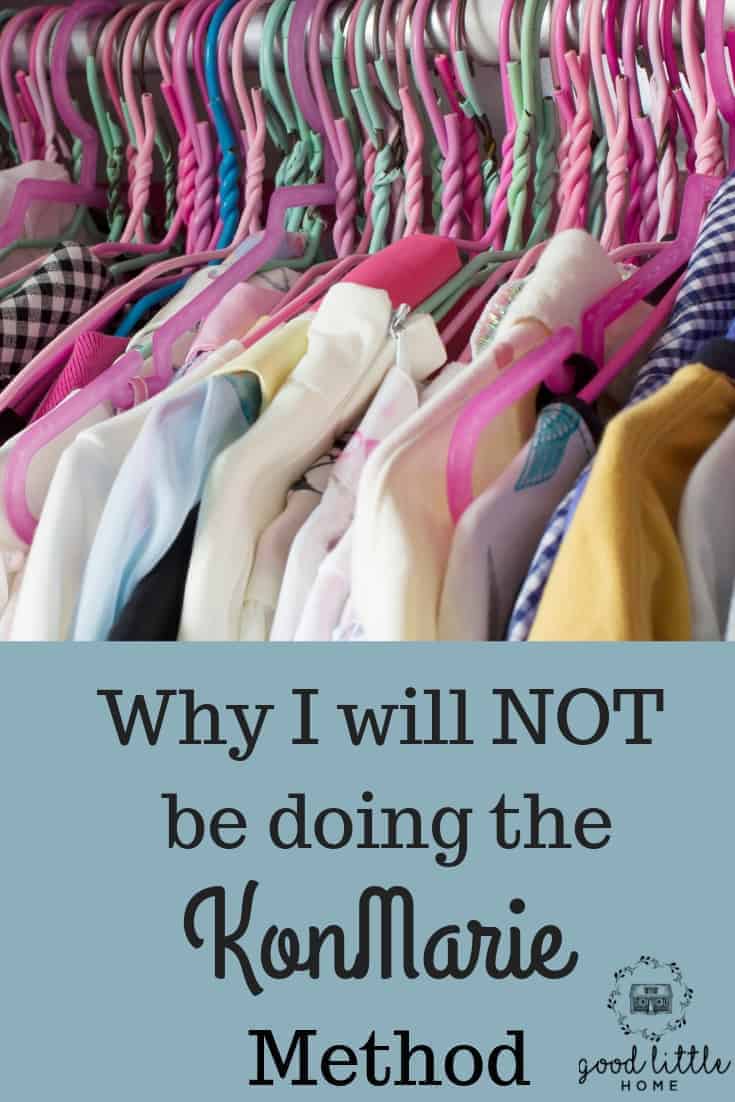 So the world seems to have gone crazy for Marie Kondo. Her Tidying Up show has taken Netflix by storm. As for me, not so much. I will not be doing the KonMarie tidying method. I binge watched the show one week when I had the flu. My friends all warned me I would be…