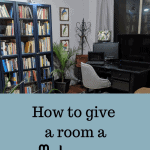 Transforming my Space into a Den/Office

The first part of our journey to get our house ready to sell was to make what had been my son’s workout room into a Den/Office for my husband. We both have a dream that he could someday work from home, so now we will be ready. When we move this is one space I will not have to redesign. We will just box it all up and take it with us.

Know who you are decorating for, and start with an inspiration piece.  My client in this case then is my husband. He has a very large collection of books, and yes they all spark joy. There is no getting them out of our house. In addition to his books, he also has a little parrot he dearly loves. I am afraid if it came down to me or his bird having to go, I would lose.  Since we are both animal lovers that’s ok.  Greg also likes dark wood and more traditional styles.  So with all that being said, this was my inspiration for the room. It is from an Etsy shop called Instant Graphics. I found it when I was doing my Parrot Lovers Gift Guide. This meant I was going to be using a much stronger color palette than I do in my Farmhouse rooms. This room would be bold primary colors, with a tropical vibe.  Using primary colors can sometimes lead to a space that feels like a kids room, so I definitely was trying to avoid that.

Another piece I had to have.

I also fell in love with this lampshade when I did my gift guide and I knew it had to be in this room. It didn’t change the color palette and fit with the tropical parrot theme of the room. I could have stopped here and made a mood board for the room, but I already knew what I was going for. Love it? It’s in the gift guide too. Since the books were going to be a feature point in the room, I decided to find the bookcases first. I decided on the blue Billy with glass doors from Ikea. This would bring the blue from the prints and lampshade into the room in a big way. I actually found one of them used online, so that one was only half the price. To put them into the room the way I wanted them to go I was going to start with five, and add a 6th if I had to. I thought we were going to be putting new flooring in that room, but Greg didn’t want to. The floor that is in there now is a wood look peel and stick. The floor itself is not as awful as that may sound, but years of kids have taken their toll on it. That meant that I also had to buy a throw rug.

I found one at At Home that I thought would go well with the parrot prints since it had the blue, yellow, and red tones that the print had. It also had brown in it, which was another color I was using both in the print frames and the furniture. The story of the desk.

A funny little story about the desk. I had ordered an adjustable stand-up desk because Greg really wanted one. The part I ordered was just the legs and the motor, I was going to make the top myself to match the other wood in the room. But then, the desk legs were lost in transit. According to the tracking they were delivered someplace in Texas, but I live in Arizona. When I told Greg what had happened he said he really didn’t want to spend that much on a desk anyway.

Enter desk two. I decided I could use a desk that we already had. It was the right color but a little bit too small. Greg’s desk has a 42″ monitor, and a 30″ monitor and a laptop, so it has to have a big top. In moving the second desk from the room it was into the new room it got a giant gouge across the top. I tried it anyway, but yes it was also too small, and I didn’t really like the color.

At last a desk.

The next desk was perfect, except for being black. Black was an accent color so I decided to live with it. It has a Farmhouse look to it. I found it online for sale so the price was right. I knew I was going to have to do a little work on it, but not much. Then we loaded it into the truck. Never take a teenage boy to pick up furniture when he is in a hurry to get to a girls house.  Instead of lifting up over the little divot between the truck bed and the tailgate he decided to just muscle it in, breaking off a leg in the process. I was able to fix the leg with wood glue an 8 inch bolt and some deck screws. It’s all put back together as good as new now. My bargain desk looks great in the room.

A place to sit.

Finally the last big piece of furniture was a brown leather love seat that I took out of my bedroom. Shopping the house makes a project more fun and keeps the cost down. It was the big prescence of brown in the room.

So here it is all put together. This is the other side of the room. And finally, the corner where the inspiration pieces were used. It was fun to transforming my space into a Den/Office.  Next up a bedroom that has become a dumping ground turns into a pretty girls bedroom.